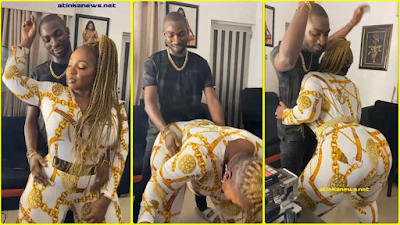 curvaceous Nollywood actress Anita Joseph has got social media buzzing after twerking on her husband,Fisayo Michael in latest video.
Anita Joseph walked down the aisle with her husband, Fisayo Michael popularly known as MC Fish on the 14th of February, 2020.
Sharing the video on her Instagram page, The actress who is known for her massive shape and easily flaunts it, wrote:
“What is wrong with you two shaaaa… @realmcfish #MUMMY# This Video is for happy people 👋 If you want to preach try on your siblings inugoooooo ..I and my Hubby na sooo we be 🤣”
Watch the video below :
Meanwhile, AtinkaNews earlier reported that, Anita Joseph has revealed that she will no longer be serving fans their favourite twerking videos on social media because her husband frowns on it.
The actress who tied the knot on Valentine’s day made this statement in an interview with Punch’s Saturday Beats.
According to Anita Joseph, she will no longer take controversial roles in movies and has stopped twerking on social media now that she is married.
Explaining the reason for her decision, the actress said:
“I’ll miss my twerking videos. My husband does not like them. He once told me, ‘Your body is massive and you’re the most beautiful girl that I’ve ever seen.
“Please don’t twerk anymore. However, I twerk in the room these days.”