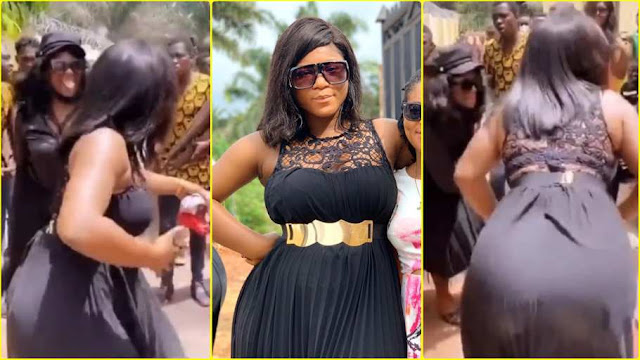 Popular Nollywood actress Destiny Etiko was spotted in a video dancing happily with her friends after the successful burial of her late father on Saturday.
These are sad times for actress, Destiny Etiko, as she has been thrown into mourning following the death of her father.
The curvaceous epic movie screen goddess, recently kept her fans updated about his burial preparations. She took to her Instagram account to share a video of the arrival of her father’s corpse for burial.
In the video, the coffin with her father’s body is seen been carried into the compound by some undertakers. Sharing the video, she wrote: “Daddy arrives home RIP my headmaster Will love u forever.”
After days of weeping over the death of her father, Destiny Etiko decided to wind down following a successful burial ceremony for her father.
Her friends, in a bid to cheer her up and ease her pain over the loss of her dad, encouraged her to join them in dancing.
Watch the beautiful actress dancing happily with her friends below.